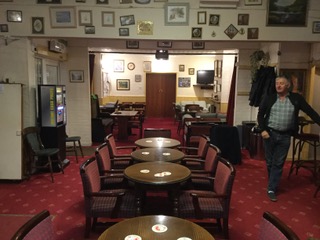 Since 19th of July the Club has been following new government guidance and bar service has resumed. The screens remain to help protect the staff, and the wearing of masks will be encouraged when moving around the Club.

Mottisfont Club House was built in 1919 by Arthur Humbert on land given by Mrs Baker-Mill in memory of villagers who gave their lives in the First World War.

In 1925 Arthur Humbert leased the club to Rev. Cyril Edwards and Thomas James Aylward, who were the first trustees of the then named Mottisfont and District Mens' Club, for an annual fee of two shillings and sixpence.

On the death of Arthur Humbert in 1934, the Club House and land were left to the trustees. This transfer was completed in 1945 and, at that time, the trustees were Harold James Chase, John Robert Peach, Walter Charles Pitman, George Vane and Ernest Humbert (Arthur’s representative).

A memorial stone was added next to the original stone in the club to remember those from the village who gave their lives for their country in the Second World War.

The President of the club has a non-voting position, but keeps an eye on things for the members.

The day to day running of the club is carried out by the steward and the committee.

The club is available to hire for daytime activities, and also can be used in the evenings for birthday parties, wedding receptions, christenings, or other events.

Email: to send Mottisfont Social Club an email, please use this form.

This page was last updated on 28th September 2021.